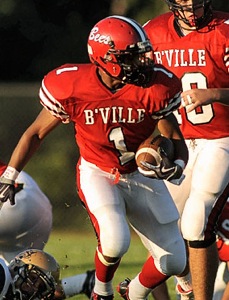 The Fizz is unsure why Malik Burks from Baldwinsville doesn’t seem to be getting a ton of attention. The kid is sick, to say the least.

It’s time to hop back on the recruiting trail. The Fizz is unsure why senior running back Malik Burks from Baldwinsville doesn’t seem to be getting a ton of attention. The kid is sick, to say the least.

Fizzster Mike Couzens was at his game last night against Central Square, and what he saw was blinding speed.

“The kid gets past the first level and it’s over,” said Couzens after Burks went for four scores on the night, one of those being an 80-yard touchdown run. His team won that game, by the way, 52-14. “He looks like a man among boys, to use the most cliche term possible for this situation.”

This kids credentials aren’t the best of sorts; 5’9″, 180 pounds. But that’s reminiscent of Mike Hart, who was dynamic at Michigan and solid in the NFL.

But he’s not listed on any of the boards. We here at The Fizz know that we’re no experts, but there should be some interest for a guy with those kind of stats and speed (especially by SU since he’s in its backyard).

And especially this week, the Orange should know about getting beaten by a speedster.

Which gets us to our next point. West Virginia. The Mountaineers are a team the ‘Cuse can beat this weekend, another squad with ball security issues.

Not to mention, the Syracuse rushing defense has proven itself as one of the best in the league. From a field perspective, Derrell Smith looks like a leader for not only the linebacking corps, but the team. He’s everywhere on run defense, and seems to take charge of a depleted unit.

If the Orange is going to win, it is going to be done stopping Noel Devine. He makes their team go, simple as that. Should be a fun afternoon sprint on the Dome tu