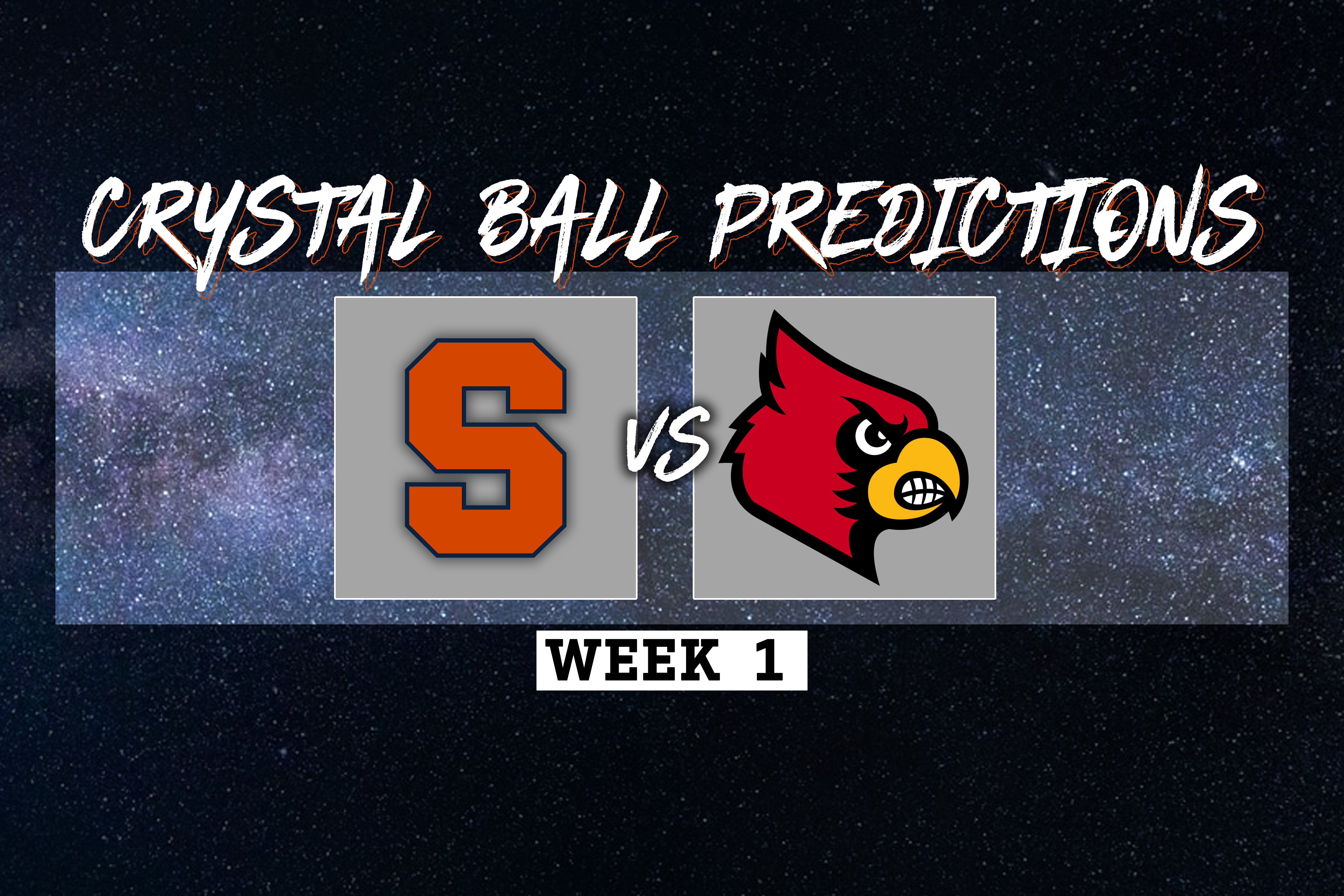 This game is going to be predicated on whether Syracuse can stop the run. Last year, Louisville gashed SU early and often with zone stretch runs, and the Cards return 4 of their 5 starters on their O-line. The Orange’s defensive line is the clear weakness of Tony White’s unit. Linebackers fitting gaps and wrapping up will be paramount before Malik Cunningham and a stable of backs get to the second level. Offensively, the Syracuse passing game still seems like a work in progress. The depth chart didn’t list any of the younger receivers, so keep an eye out for which ones flash during the game. Garrett Shrader needs options to move the ball through the air and keep up with the Cardinals.

I think Malik Cunningham and the Louisville offense will roll again under the tutelage of Scott Satterfield. The defensive line is just too much of a question mark and the Cardinals can really do some damage on the ground. Offensively, SU will pass the ball better but fail to finish a big red zone chance with a touchdown and have a costly turnover late in the fourth.

This might be an unconventional pick in terms of what the past has proven. The Cardinals have outscored the Orange 71-3 over the last two matchups, which could mean one of two things. The first is that Louisville knows how to scheme against the Orange no matter their personnel. The second is that SU is due for its first win over the Cards since 2018. With those options in mind, give me the latter. I understand that Malik Cunningham is still Louisville’s quarterback and Jalen Mitchell is still the Cardinals’ top back. That duo also combined for 311 of Louisville’s 382 total yards a season ago in a 41-3 victory. But if we’re going to harp on the past, the Cards lost four of their last six games and are relying heavily on transfer wideouts to complement Cunningham if the running game is kept idle. Now that’s a big “if” and frankly, Louisville’s QB1 will most likely have his way with a belittled SU D-line, but any Syracuse fan should have faith that the linebacking core, spearheaded by All-ACC returnee Mikel Jones, should keep Cunningham from the chains on occasion.

With that in mind, let’s start praising what the Orange did to rejuvenate their offense in the offseason. The ‘Cuse brought in Michigan State transfer CJ Hayes to star as their wideout. They added a potent QB2 in Carlos Del-Rio Wilson to anchor the quarterback’s room in case of injury or fatigue. Plus, SU retained Sean Tucker after a stellar season could have pushed him into the transfer portal.

But the deciding factor to why I have the Orange in this ACC and season opener revolves around the coaching staff. After a crumbling finish last season, many on the Syracuse staff could have mulled over the losses but lauded the team for playing themselves into a bowl-clinching scenario on three separate occasions. Instead, SU lured the two coaches who led their unit atop the ACC in passing yards last season up to Central New York to couple with last year’s conference-best rushing attack. Virginia’s offensive coordinator Robert Anae and QBs coach Jason Beck are now a part of a rejuvenated ‘Cuse offense with potential through the roof. Starting quarterback Garrett Shrader has a new mentor and understands Dino Babers’ system more with a season under his belt. It’s also very promising that every SU player is lauding the freeness and long leash these new coaches have implemented, especially when last year’s dumpster fire was vehemently blamed on the coaching staff’s inability to let their players just play their game.

Although the first half will prove hard-nosed and tight-knit, a strong third quarter has the ability to stabilize Cunningham and company, ultimately handing Syracuse a 1-0 record heading into week two against UConn.

Depending on the way you look at this Syracuse team, the 2022 Orange will either be the saving grace for Dino Babers after several difficult years or his possible ticket out of town. I tend to believe the former will be true instead of the latter, but ‘Cuse’s cause won’t be helped by an opening day defeat. While it’s correct that Syracuse is catching Louisville right off the bat instead of in a banged-up late-season matchup, the Cardinals simply have SU’s number. Seven losses in eight tries to the Cards – all by at least 22 points – is more than just a trend. UL quarterback Malik Cunningham has a legitimate chance to be regarded as the ACC’s best quarterback by season’s end, and he threw just one more incompletion (5) than touchdown passes (4) against the Orange last year. Look for Scott Satterfield and company to take the W, but keep your eye out for an improved Syracuse passing game. If new offensive coordinator Robert Anae’s system is working correctly, tight ends Oronde Gadsden II and Maximilian Mang may have a decently large role in this game.

The JMA Dome will be rocking, and the Orange offense under Robert Anae and Jason Beck will feed Sean Tucker early and often, and continue to do so all night. Garrett Shrader will be effective enough to drive SU down the field. Malik Cunningham and the Cardinals will rally late, but it won’t be enough as Syracuse is able to get a big home win in its season opener at home.

The combined score of the past two matchups between the Cardinals and Orange is 71-3, not in SU’s favor. Let’s do the good news first. This time around, the game is being played at the newly named JMA Wireless Dome (that’s going to take some getting used to) after the previous three have been in the Bluegrass State. The last time these two teams met in the 315, Syracuse won in a 54-23 landslide. The bad news is that Malik Cunningham is back for Louisville. The Cardinals signal-caller has torched the Orange in the past, registering a combined 13 touchdowns in three starts. The home-field advantage will help, but not enough to where SU is victorious.